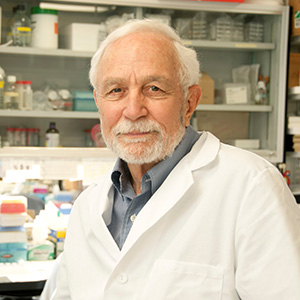 NR5A2 orphan receptor familyOvulation and luteal functionReactivation of the embryo at the termination of the diapause
Phone: 450 773-8521 Ext. 8382
E-mail: bruce.d.murphy@umontreal.ca

My laboratory has focused on the role of orphan nuclear receptors of the NR5A family in regulation of reproductive events.  We have shown that NR5A2, aka liver receptor homolog-1, is essential for the processes of ovulation and luteal function. Its expression in the uterus is likewise necessary for establishment of gestation.  NR5A1, aka steroidogenic factor-1, is necessary for maturation of ovarian follicles.  Our current studies are aimed at exploring the multiple mechanisms by which NR5A1 and NR5A2 regulate ovarian events, including proliferation, differentiation and cytoskeletal remodeling. Our investigations are characterized by phenotypic analysis of targeted mutations in mice combined with global approaches to determining the widespread molecular changes that occur associated with depletion of the NR5A genes.

We have had a long-standing interest in the phenomenon of embryonic diapause, an evolutionary strategy whereby there is a predictable arrest in the development of the blastocyst.  This arrest results in the uncoupling of mating and parturition and allows for the birth of offspring when survival is optimal. We have shown that embryos enter diapause in carnivore and rodent species when the uterine signals are insufficient to allow continued development.  A class of compounds known as polyamines are key players in this mechanism, as a paucity of polyamines is associated with developmental arrest.  Our current studies focus on the events that take place in the embryo that interrupt embryogenesis and those which characterize the reactivation of the embryo at the termination of diapause.